The Siam Paragon is on Rama I Road in the Pathum Wan district in Bangkok and is located in the heart of the Bangkok shopping district. Next door to the Siam Paragon is the Siam Center and Siam Discovery Center and opposite Siam Square with the MBK Center a short walk away. The BTS Siam Station is build right next to the mall and across the street from the Novotel Bangkok On Siam Square Hotel in Thailand.

The Siam Paragon is one of the biggest shopping centers in Asia having opened in December 2005. The shopping center includes many high-end stores and restaurants as well as a 15 cinemas and auto showrooms from such auto makers as BMW, Lotus, Lamborghini, Aston Martin, Bentley, Porsche, Jaguar, Spyker and Maserati. There also other high-end stores such as Gucci, Chanel, Balenciaga, Valentino and also Cartier and  Versace and Louis Vuitton amongst others. 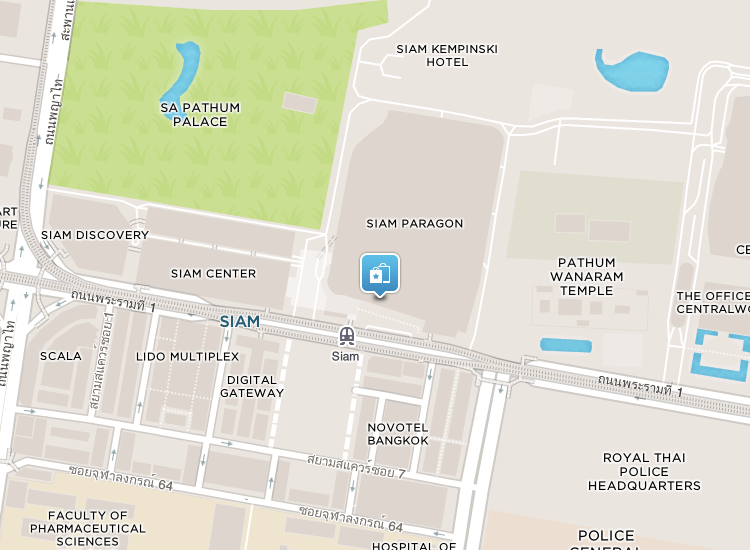 Siam Paragon is also home to the Siam Ocean World aquarium and the well known Thai Art Gallery in Bangkok. There is also an opera concert hall and a large bowling alley and karaoke centre which is very popular on Friday nights. If you are looking for even more options then The Emporium is not too far away. The shopping mall also has 8,000 square metres of food stores, resturants serving local and internaional foods and there is also a large foodcourt which is reasonably priced.